Anne Boleyn as 'The Lady of the Garter': A Rediscovered Image of Henry VIII's Second Queen


One of the great treasures of St. George's Chapel, Windsor Castle is the Black Book of the Garter (Fig. 1). Bound in black leather - hence its name, it contains the history, regulations, and ceremonies of the illustrious Knights of the Order of the Garter, founded by King Edward III in 1348. 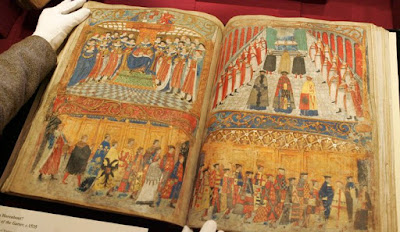 Created in 1534, the Black Book is attributed to the Flemish artist Lucas Horenbout (or Hornebolte) who was active as an illuminator of manuscripts and as painter of miniature portraits at the English court from the 1520's to the 1540's.

As the Black Book was conceived in the reign of Henry VIII, he was naturally featured in it. While his royal predecessors, from Edward III to Henry VII, had their likenesses included as well, Henry VIII was accorded pre-eminence. He is shown twice with the Knights of the Garter (Fig. 2), and then again alone at prayer (Fig. 3). Not only was Henry, as the Sovereign and as the highest ranking Knight, given due honour, but so was his current wife Anne Boleyn.

On the 20th page of the Black Book, a lady, crowned and sceptred, sits enthroned surrounded by courtiers (Fig. 4). Behind her are six waiting women, and before her on the left, stands an armoured herald bearing the arms of England on his tabard. On the right is an 'ancient knight' wearing a rich chain of office. The accompanying text, written in Latin, identifies her as the Queen Consort who presides over the tournaments the Garter Knights take part in.

'At this appearance, was his excellent Queen, splendidly arrayed with three hundred beautiful ladies, eminent for the honour of their birth, and the gracefulness and beauty of their clothing and dress. For heretofore when jousts, tournaments, entertainments and public shows were made, in which men of nobility and valour showed their strength and prowess, the Queen, ladies, and other women of illustrious birth with ancient knights, and some chosen heralds were wont to be, and it was supposed that they ought to be present as proper judges, to see, discern, approve or disapprove what might be done, to challenge, allot, by speech, nod, discourse, or otherwise to promote the matter in hand, to encourage and stir up bravery by their words and looks'.[i] 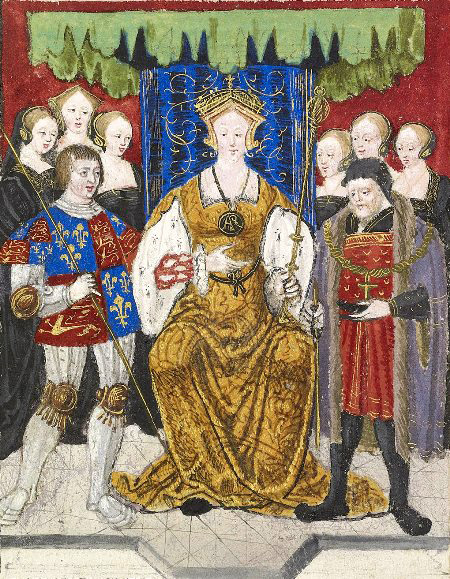 The 'excellent Queen' referred to is Philippa of Hainault, the wife of Edward III. However, a close inspection of the illumination shows that the sitter wears a large circular pendant at her bosom. On it are combined letters in gold: A and R - that is Anna Regina. It is Anne Boleyn as Queen Philippa.[ii]

Rather than the medieval costume of King Edward's reign, the 'Lady of the Garter' and her attendants are in fashions of the Tudor court. The old knight is in a doublet and gown of the time of Henry VIII, while the waiting women wear dresses typical of the 1530's with low squared necklines. Five of them sport rounded French hoods, while a lady on the left has a gabled English one. Anne Boleyn too wears as an English style headdress, and is robed in cloth of gold; a dress very similar to that seen on Henry VIII's subsequent wife Jane Seymour (Fig. 5). 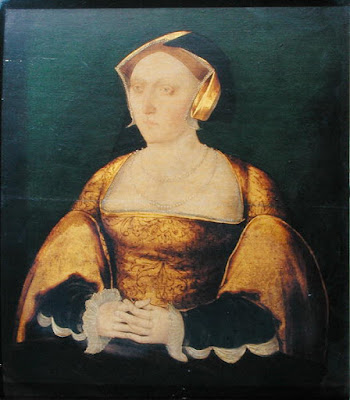 Fig. 5  Jane Seymour (by an Unknown Artist), Society of Antiquaries

By updating Philippa of Hainault and her court to the 16th century, Horenbout was following an artistic convention of contemporizing the past (as in seen in numerous works of art of the Middle Ages and of the Renaissance where historical and Biblical figures are shown in modernized clothes and settings). As well, he was also creating a backdrop where he could pay tribute to the present Queen by having her stand in for Philippa. Even though Anne Boleyn was not known to have been celebrated as a Lady of the Garter as Philippa and successive English queens were - the practice of including ladies in Garter rituals seemed to have fallen by the wayside by the reign of Henry VIII[iii] - she was still deemed worthy as Queen of England for inclusion in the Black Book.

By assuming the part of Philippa of Hainault, Anne Boleyn could also emulate her qualities. Philippa was described by the chronicler Jean Froissart  as 'the most gentle Queen, most liberal, and most courteous that ever was Queen in her days'. She was especially remembered as the lady merciful, who had begged her husband the King to spare the lives of the burghers of Calais. Philippa was also recognized as a patroness of learning. The Queen's College, Oxford, was founded in her honour. Most importantly, as Philippa was the mother of numerous children, including five sons who lived into adulthood, Anne was expected to be just as fertile to safeguard the Tudor dynasty.

As Anne Boleyn was Philippa in the Black Book, did Henry VIII see himself as Edward III? No, rather he saw himself as another great king. The book contains a standardized image of Edward III, but that of Henry V is clearly Henry VIII himself (Fig. 6). But why Henry V and not Edward III? Though the Black Book lauds the latter as the founder of the Order and as 'one of the most invincible Princes that ever sat upon the English Throne',[iv] Henry VIII might have taken a more sober assessment of Edward's triumphs. The King who had won renown at Crécy and Poitiers, was also the same who later lost his territories in France, mourned his son and heir Edward the Black Prince who tragically predeceased him, and found himself dominated by his grasping mistress Alice Perrers and her unpopular faction. That said, Henry V, as the great hero of Agincourt, and whom the Black Book extols as 'the most invincible prince' and 'most excellent in all kinds of virtue',[v] probably had more appeal to Henry VIII. Unlike Edward III who slipped into decline in his later years, Henry V died relatively young at the age of 36, leaving a successful legacy behind of martial achievements which Henry VIII was most eager to follow. Besides Henry VIII's identification with Henry V, it should be noted that his likeness also appears in that of his grandfather Edward IV in the Black Book. 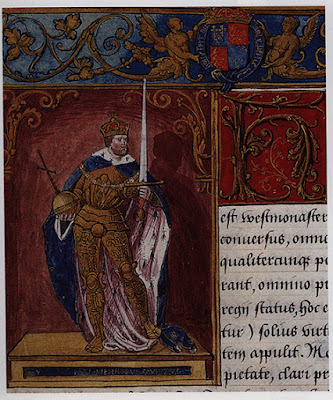 Fig. 6  Henry V, The Black Book of the Garter (detail)

With the likeness of Henry VIII used for that of Henry V, how good is that of Anne Boleyn? While the faces of her attendants and those of many others in the Black Book are clearly individualized and meant to depict actual persons, Anne's is admittedly disappointing in its blandness.[vi] Evidently, Horenbout was more interested in presenting her as an idealized icon of majesty (for instance, notice how the figure is considerably taller in comparison to her courtiers), anticipating the stylized portraits of her daughter Elizabeth I. Still, what can be seen is that the artist depicted Anne with a long oval face and a pointed chin; features comparable to the well known 'B' pendant type portrait of Anne (Fig. 7) which was most probably originated by Horenbout as well[vii], to a medal of her cast in 1534 (Fig. 8), and to an Elizabethan enamel-on-gold locket ring portrait (Fig. 9). 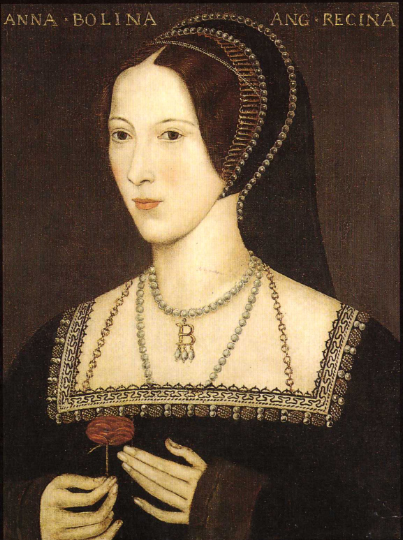 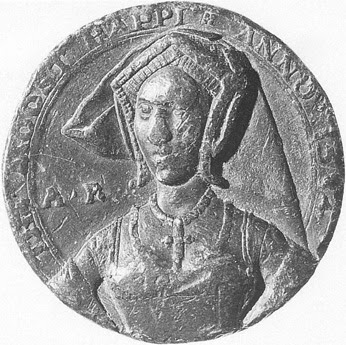 Fig. 8  Anne Boleyn (by an Unknown Artist), The British Museum 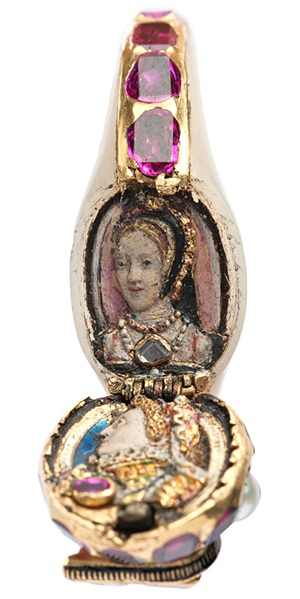 Fig. 9  Locket ring (by an Unknown Artist), The Chequers Trust

Anne Boleyn's inclusion in the Black Book, and the making of her portrait medal, was probably in the earlier part of 1534. She appeared to be pregnant, and the royal couple were looking forward to a boy this time. But by summer, Anne had either suffered a miscarriage or it was a phantom pregnancy.
Despite being Henry VIII's most famous wife, Anne Boleyn's portraiture remains lacking. The two Hans Holbein drawings said to be of her are suspect,[viii] and the famous 'B' pendant portraits are probably all Elizabethan or later. However, with the recognition of the Black Book's Lady of the Garter as Anne Boleyn, it is hopeful that more images of Anne made in her own lifetime, besides just the 1534 medal, are still yet to be discovered.

[ii] That the sitter was Anne Boleyn was first noticed by Sir George Scharf, the Director of the National Portrait Gallery, in a commentary about the portraiture of Henry VIII's six wives by John Gough Nichols. See: G. Scharf, 'Notes on several of the Portraits described in the preceding Memoir, and on some others of the like character', Archaeologia, Vol. 40, Issue 01, January 1866, p. 88. Regarding the A. R pendant, a variant of it, a 'broach having the letters R. A. in diamonds' was recorded among Anne's possessions': Letters and Papers, Henry VIII, XII (ii), no. 1315.
[iii]   'Ladies of the Garter: Image of the month', website of The College of St. George, Windsor Castle: https://www.stgeorges-windsor.org/archives/archive-features/image-of-the-month/title1/Ladies-of-the-Garter-Image-of-the-month.html (accessed April, 2017).

[viii] R. Hui, 'A Reassessment of Queen Anne Boleyn’s Portraiture'.  Also E. Ives, The Life and Death of Anne Boleyn, pp. 41-44. As well, miniatures said to be of Anne (in the Royal Ontario Museum and in the collection of the Duke of Buccleuch) may be that of her sister Mary Boleyn. See: R. Hui, 'Two New Faces: the Hornebolte Portraits of Mary and Thomas Boleyn'?, Tudor Faces blog (Oct., 2011): http://tudorfaces.blogspot.ca/2011/10/two-new-faces-hornebolte-portraits-of.html (accessed April, 2017).

Roland Hui
Roland Hui is a graduate of Concordia University's Art History Department, and the author of 'The Turbulent Crown - The Story of the Tudor Queens' (2017), 'The Mary Queen of Scots Colouring Book' (2019), and 'Anne Boleyn: An Illustrated Life of Henry VIII's Queen' (forthcoming, 2023)