Becoming Jane: The Streatham Portrait of Lady Jane Grey and its Association to a Woodcut Intended for Theodore Beza's 'Icones' (1580) 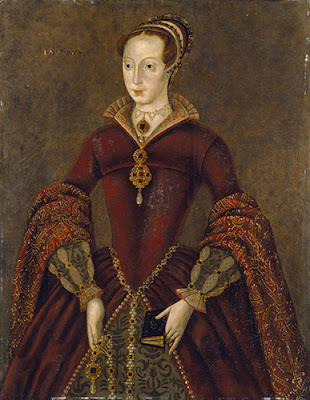 
Abstract: A portrait inscribed 'Lady Jayne' acquired by The National Portrait Gallery in 2006 has met with some controversy as to whether it was truly of Lady Jane Grey (1537-1554). A print of Jane, linked to a 1581 French edition of Theodore Beza's 'Icones' (1580) supports the identity of the sitter.

In writing a biography of the ill-fated 'Nine Days Queen', historian Eric Ives aptly entitled his book Lady Jane Grey: A Tudor Mystery.1 Owing to the brevity of her reign, not to mention her very existence - Jane was executed at the age of sixteen in 1554 - many aspects of her life have remained puzzling. Was her accession legitimate or unlawful, what precisely was her profession of faith, what was she like as an individual, and what did she actually look like?

Regarding her appearance, Jane Grey's portraiture has been problematic - not because of a lack of images, but rather the contrary. A number of likenesses are purported to be of her, but few have stood up to scrutiny.2 Of this handful, there is arguably only one portrait that can be confidently identified as the Lady Jane. Acquired by The National Portrait Gallery (London) in 2006, it is a panel of a young woman in a crimson dress, holding a book, and is labelled Lady Jayne.

This apparently lost painting was discovered in a house in Streatham in south London in 2006. According to its owner, it had been inherited from his great-grandfather. The picture, it ought to be said, was not exactly unknown. The NPG was aware of it since 1923 when the owner's family tried - unsuccessfully - to get the museum to authenticate it as a portrait of Lady Jane Grey.3 The NPG had even kept it on file, notating it as belonging to a 'private collection'. Subsequently, the picture came to the attention of art dealer Christopher Foley who arranged for its sale to The NPG.

The acquisition was not without controversy. Historian David Starkey, who was meanwhile championing a very different image as Jane Grey - a miniature from The Yale Center for British Art4 - did not mince words. He openly accused The NPG of wasting public money to buy 'an appalling bad picture'. "There's absolutely no reason to suppose it's got anything to do with Lady Jane Grey", he went on. "There is no documentary evidence, no evidence from inventories, jewellery, or heraldry to support the idea this is Lady Jane Grey. It depends on mere hearsay and tradition, and that is not good enough."5

Starkey's comments about The NPG's 'rather deplorable acquisition' as he called it,6 started a public row with Christopher Foley. "The painting is exactly where it should be. It's not a great work of art, but it is a substantial piece of history", Foley shot back. "The evidence has been supported by people who know far more about the science of painting than David Starkey. I don't know what his problem is - is it because he didn't find it"? As for the picture not being a tour de force of royal portraiture, "who says all pictures of monarchs have to be masterpieces"? Foley asked. "A great number of contemporary portraits of Elizabeth I look like pub signs".7

Naturally, The NPG stood by Foley and its purchase - said to have cost some £100,000. Tarnya Cooper, the 16th Century Curator at the museum, jumped into the fray, responding to Starkey's remark that the painting should have more going for it. "That's just wrong", she said. "Evidence from heraldry and so on very rarely exists... Its value is as a historical document rather than a work of art".8
The science that Foley had spoken of seemed to support the painting as a genuine portrait of Jane Grey. While some Tudor era paintings did have the identity of the sitter added in later on, University College London, who did a technical examination of the picture, found the inscription to be contemporaneous. According to researcher Libby Sheldon, it 'appears to have been put on at the same time as the rest of the paint'.9 And as for the portrait as a whole dating to around Jane Grey's lifetime, 'the composition of the lead tin yellow paint and its chalk background matches other paintings from that period', Sheldon concluded.10
Historical records appeared to sustain the sitter's identity as well. "If it's not Lady Jane Grey, who could it be"? asked Foley. "We checked every 'Jane' in the English aristocracy in the 16th century. There was no other plausible candidate".11


Other external evidence may lend support to the Streatham young woman as being Lady Jane Grey. Her image is related to a print comparable to a series of portraits found in the book Icones, id est Verae imagines virorum doctrina simul e pietate illustratrium. Written by the theologian Theodore Beza (1519-1605), it consisted of a collection of biographies, composed in Latin, of Protestant notables. Some of them were depicted by woodcuts.12 Published in Geneva in 1580, the book proved so popular that in the following year, it was rereleased. The new edition was translated into French by Beza's co-religionist Simon Goulard (1548-1628), who also added some new images. 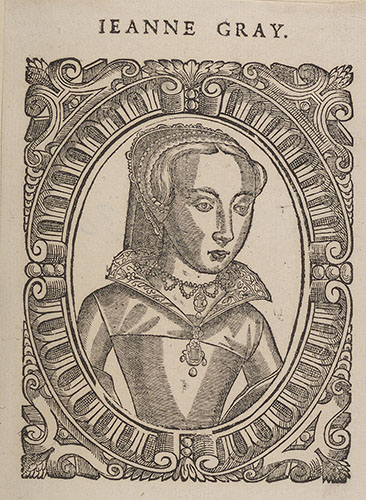 Lady Jane Grey (by an Unknown Artist, The Royal Collection)


Where Beza had labelled the portraits of his Protestant sitters in Latin, Goulard did so in French. The print of Jane Grey is identified as 'Jeanne Gray'. Obviously, this particular image was intended for Goulard's edition. But strangely enough, it does not appear in the 1581 copy, nor in the original by Beza, (where her name would have been Latinized). Her likeness is of precisely the same format as those of five sitters found in the Icones: William Tyndale, Ambrose Blaurer, Joachim Vadian, Peter Viret, and Francis Vatable.13All are placed within an oval, and they share the same distinctive frame as Jane's image. Evidently, she was originally meant to be one of Beza's esteemed Protestants, but for some reason was left out before publication. Goulard may have later intended to put Jane back in, along with a discarded biography of her, but apparently, he too decided not to as well.

It was certainly not on account of Jane's sex. Margaret of Valois (the sister of King Francis I of France) was included in the Icones as a Reformist, though she is the only female. Nonetheless, Jane Grey is mentioned though in brief. She appears in the section on Henry Bullinger, where she is described as being a correspondent of his, and that she had sent him a pair of her gloves as a memento before her death.14

That Jane Grey was considered for Beza's Icones, meant that this image of her was accepted as a true likeness in the Elizabethan era. Its source was undoubtedly an image associated with The NPG/Streatham painting. As The NPG/Streatham picture is believed to have been made 'some forty years' after Jane's death,15 thus dating it to sometime in the mid 1590s, Beza's 'Jeanne Gray' was likely created from an earlier copy that had made its way to the Continent. That a likeness of Jane Grey, taken ad vivum, existed can be inferred from an inventory of the possessions of Elizabeth of Hardwick, Countess of Shrewsbury (1527-1608) made in 1559. In it, a 'table' (that is a panel painting) of 'my Lady Jane' was described as being in Elizabeth's bedchamber.16 The Countess had known Jane Grey personally, and was close to the rest of her family as well. She must surely have had an authentic likeness of her friend, gone for only five years, and so special that it was placed in the intimacy of her bedroom. Could this have been the original version of The NPG/Streatham portrait?17

10 'Portrait 'is ex-queen Lady Jane', BBC News, January 17, 2006. The curators of the Lost Faces exhibition disagreed as to the lack of other noblewomen with that name. For example, there was the young Lady Jane Browne in the reign of Queen Mary. See: Bendor Grosvenor (editor), Lost Faces: Identity and Discovery in Tudor Royal Portraiture, p. 81.

12 The differing styles and qualities of the woodcuts indicate they were by various artists.

14 C.G. McCrie (editor), Beza's "Icones" - Contemporary Portraits of Reformers of Religion and Letters, Being Facsimile Reproductions of the Portraits in Beza's "Icones" (1580) and in Goulard's Edition (1581), London: The Religious Tract Society, 1906, p. 117.

17 At present, there are two known variants, one at Houghton Hall in Norfolk, and the other called the 'Norris Portrait' (present whereabouts unknown) after its last known owner. A third version, once belonging to Reverend Peter Peckard of Magdalene College, Cambridge (as notated on a stipple engraving of it by Francesco Bartolozzi, published in 1790, though mistakenly called 'Jane Shore'; NPG D24103) is now lost. A half-length of Queen Katharine Parr (Private Collection) has her wearing a similar costume and jewelry as the NPG/Streatham and Norris portraits. The Beza woodcut could not have been mistakenly derived from the picture of Katharine as it is clearly identified as her (with the inscription CATHARINA REGINA VXOR HENRICI VIII).