The recent sale of the Charles Brandon portrait piqued my curiosity about his famous so-called ‘wedding portrait’. The picture, which exists in two versions (the collection of the Earl of Yarborough, and that of the Duke of Bedford), shows the Duke of Suffolk with his third wife Mary Tudor.

Their marriage was out of the pages of a fairy tale. Charles, tall and handsome, had long been enamored of Mary, the beautiful sister of his King – and best friend – Henry VIII. But like so many royal princesses, Mary was destined for the foreign marriage market. Her intended was King Louis XII of France. Suffolk, a ‘mere’ Duke, just wouldn’t do.

Mary, duty bound to her brother and to her country, made ready for France. She did, however, obtain a promise from Henry VIII. Should Louis die, she would be free to choose her next husband herself. Confident that she could have Brandon one day – after all, how long could the 52-year-old Louis (elderly by the standards of the time) last? - Mary set sail for France in September 1514.

Louis, eager to meet his lovely young bride, waylaid the English entourage on its way to Abbeville, on the pretext of a hunting trip. At their ‘accidental’ meeting, Mary was everything the old King expected. Slender, with a pale complexion, and reddish gold hair, she was indeed the ‘paradise’ men swooned over. What Mary at 19 really thought of Louis - a gent old enough to be her father - she kept to herself. She conducted herself with charm and dignity, and was commended for being ‘extremely courteous and well mannered.’

The wedding took place on October 9. Louis was evidently pleased with his wife. The morning after, he boasted how he had ‘crossed the river three times.’ If Mary was offended by his crudity, she never showed it.  She played the part of the adoring trophy wife until Louis, exhausted by his nubile young wife some snickered, died on January 1, 1515.

Free at last, Mary expected Henry VIII to keep his vow to her. However, as a King first and a brother second, Henry had other plans for his newly single sister. She must again fulfill her obligation to England and wed a foreign prince and stranger. Already suspecting her brother would renege on his promise, Mary grew frantic. When Brandon arrived in France in late January to take her home, she desperately begged him to marry her. She would rather ‘be torn in pieces,’ she cried, than to make another loveless match. Unable to resist her tears – he had never seen a woman so weep, Brandon later recalled - and that their chance at a life together might never come again, he wed Mary in secret.

When all was revealed to Henry VIII, he was furious. His closest friend and his favorite sister had both betrayed him. The former friendship between Brandon and the King was no guarantee, as Suffolk himself lamented, that he would not be ‘put to death, or be put in a prison, and so to be destroyed.’ But as fairy tales have happy endings, Charles and Mary had theirs. They were eventually forgiven and allowed to return to England. There, the couple held a public wedding, and the joyous occasion was even graced by Henry VIII himself. The Suffolks went on to have four children (though only two – Frances, the mother of the tragic Lady Jane Grey, and Eleanor - survived into adulthood) until Mary succumbed to a fatal illness in 1533. Charles, who went on to marry yet again, died twelve years later.

The ‘wedding portrait’, with an affectionate Charles and Mary holding hands together, celebrates the union of Queen and commoner. Inscribed onto the Yarborough version is a poem:

Though the verses may have been added later1, they do emphasize the unusual pairing of Charles and Mary. The curious object in Mary’s right hand reinforces the theme. The artichoke from which a caduceus emerges is suggestive of a royal orb, recalling Mary’s former glory as King Louis’ wife. As artichokes were grown in Mediterranean France, the vegetable may have been suggestive of Mary’s former status as its Queen. More likely, it was meant as a symbol of love and fecundity. Artichokes were said to be sacred to the goddess Venus.

Another classical allusion can read in the caduceus. This was the winged staff borne by the god Mercury. According to legend, as a boy, Mercury had chanced upon two battling snakes. Wanting to make peace between them, the youth separated the belligerent pair with a stick. The two serpents then entwined themselves around it in harmony. This uniting of opposites was a fitting representation of the Suffolks’ concord - the merger of ‘cloth of gold’ and ‘cloth of frieze.’2 But lest the caduceus (and the artichoke) appear too ‘pagan,’ the staff on which the snakes are wrapped is in the form of a Christian tau-shaped cross

It would be natural to assume that the double portrait was commissioned shortly after the couple’s marriage in 1515. However, it appears to have been painted much later – about twenty years afterwards, probably after Mary’s death in 1533, by the looks of her clothing. Historians have paid little attention to her costume. Past observations have been limited to the fashionable French attire she wears, and that she was loaded with jewels probably given to her by her late husband King Louis.3 While Mary’s clothes are French in style, they are not of circa 1515, but of the late 1520s to the 1530s.

Mary’s under-sleeves which are partially open at the bottom – allowing segments of her white shift to be pulled out - and fastened at intervals by pieces of goldsmith’s work mounted with diamonds, is similar to those worn by her sister-in-law Katherine of Aragon in a miniature dating from the mid to late 1520s. This style extended into the 1530s as seen in many paintings of Henry VIII's third wife Jane Seymour.


Mary’s headgear is also of a date later than about 1515. Her cap, with a lower billiment of a row of pearls, and an upper level consisting of diamonds set in gold inter-spaced by double pearls, is comparable to that worn by Anne Boleyn. While ‘French hoods’, as these were called, were worn at the time of Mary’s first marriage, they were not of the shape as seen in the Yarborough and Bedford pictures. The hoods, as worn by maidens in a manuscript celebrating King Francis I’s entry into the city of Lyons in July 1515, are of an earlier form. The caps have no upper and lower billiments, only a rim of decorative metalwork arching the face and extending below the chin. The headdress itself is covered in a rich cloth, usually black, and has a ‘curtain’ or veil in the back, which falls behind the shoulders. Mary, had she have painted in 1515 or shortly afterwards, would have been sporting this variant of the French hood, not the later type as seen her portrait with Charles Brandon.


So if the portrait was not painted at the time of their marriage, could it have been done in a sitting given in the early 1530s? It seems unlikely that the Duke and Duchess would have waited that long – almost two decades – to finally commission such a work. What may have prompted its creation was Mary’s untimely death in September 1533. The picture was thus a celebration of the marriage, and a memorial to it. If it was indeed painted after Mary’s passing, it was almost certainly derived from two separate portraits of Mary and Charles, now lost.
So why the portrait then, after his wife was gone? Certainly a commemoration of their love, and perhaps Brandon’s reminder to all, that despite Mary’s death, he was still brother-in-law to the King of England; hence a power to be reckoned with still. Anne Boleyn’s rise had left Brandon in the cold, and the picture may have been his way of reasserting his diminished standing.5 Later, Suffolk did regain the King’s favor after Anne fell; he had the pleasure of attending her trial and execution in 1536.

When the Yarborough version of the painting was exhibited at the Henry VIII – A European Court in England exhibition in 1991, the curators admitted that ‘it still awaits detailed research.’ 4 Hopefully, more efforts will indeed be made to study the Yarborough and Bedford pictures, particularly their dendrochronology. Whether they were done in circa 1515 or some twenty years afterwards as it is suggested here, can finally be determined.
UPDATE - FEB. 21, 2021
This painting has been brought to my attention.
It shows King Francis I with his second wife Eleanor of Austria. In her hand is an artichoke with a caduceus like Mary Tudor's.
Evidently, this picture was made to celebrate their marriage in 1530 (though an unhappy one; Francis was forced to marry Eleanor by her brother the Emperor Charles V). 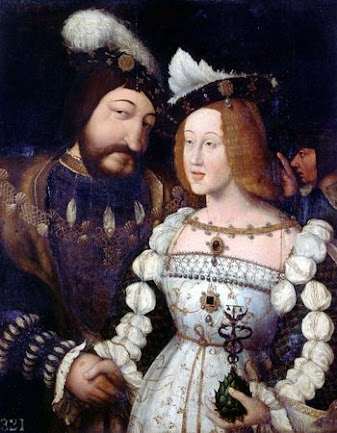 1 That the verses appeared in a banner borne by Suffolk himself in a tournament, or that they were uttered by Henry VIII at the public recognition of his sister’s marriage is romantic fiction.

2 The caduceus was also a device of Louise of Savoy. In a manuscript honoring the accession of her son Francis I to the French throne, she was hailed as Madame Concorde. The caduceus was also associated with Francis as a symbol of kingly eloquence. See: LeCoq, François Ier imaginiare: symbolique & politique à l’aube de la Renaissance française, p. 415 and p. 426.

3 Hayward, Dress At The Court of Henry VIII, p. 172, and Starkey, Henry VIII – A European Court in England, p. 49. While Hayward is correct in assuming that Mary introduced French fashions to the English court upon her return from France, she could not have brought the later variant of the French hood as depicted in the Yarborough and Bedford portraits.

5 I am grateful to Dr. Martin Spies (University of Giessen, Germany) for his suggestion that the Yarborough and Bedford portraits may also have been meant to fully legitimize Charles Brandon's union with Mary Tudor, due to his complicated past marital history. Years later, when Mary I was Queen, there was talk of declaring their granddaughters, Lady Jane Grey and her two sisters, as bastards, and thus incapable of inheriting the throne. This was almost certainly a reference to the validity of the Suffolk marriage. Spies also believes it is possible that the Yarborough/Beford pictures may have been commissioned, not by Charles Brandon, but by his descendants to advance the Suffolk claim to the English throne. Similarly, images of the Duke’s granddaughter Lady Katherine Grey with her son Edward Seymour may have served to further the family’s dynastic ambitions. See: Spies, 'The Portrait of Lady Katherine Grey and her Son: Iconographic Medievalism as a Legitimation Strategy', Early Modern Medievalisms. The Interplay between Scholarly Reflection and Artistic Production, Alicia C. Montoya, Sophie van Romburgh and Wim van Anrooij (eds.), Intersections 15 (Leiden/Boston: 2010), 165-190.

Dress At The Court of Henry VIII, by Maria Hayward. Leeds: Maney Publishing, 2007.